Home/ Blackberry/ Healthy Food/ Vegetables/Blackberries are nutritionally packed with vitamins C, A, and minerals such as potassium

Blackberries are nutritionally packed with vitamins C, A, and minerals such as potassium 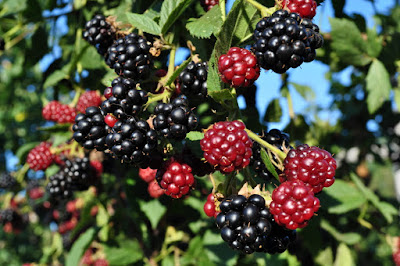 Blackberries are a type of berry that is delicious eaten raw or added to tarts and other desserts. The fruit contain vitamins A, C and K and minerals such as potassium, magnesium and copper. Blackberries also contain dietary fibre. In Victoria, blackberries are at their peak between December and February.

What is a blackberry?

Happily married with both savoury and sweet dishes, luscious, nutritious blackberries can complement a simple plate of fresh, soft white cheese or tumble onto your plate as you take your first piece of freshly baked tart.

Blackberries are native to Australia, Asia, Europe and North and South America. Early European settlers found wild blackberries growing on vast tracts of land and used them as food and for medicinal purposes. Landowners also planted prickly blackberry bushes to keep out intruders and wildlife. A thornless variety of the European blackberry was developed in the USA in 1930.

In Australia, cultivated blackberries are sold in punnets (containers) but not by variety. They are black and oval shaped, each berry made up of a number of small, round globules (drupelets).

Wild European blackberries can also be found growing throughout Australia in bushland, parks, pastures and orchards and beside roads. These blackberries are considered a Weed of National Significance and now cover an estimated 8.8 million hectares of southern Australia.

Why blackberries are good to eat

How are they grown and harvested?

Cultivated blackberry plants grow best in areas with high rainfall. The plant is a shrub with prickly stems that can arch or trail along the ground. Blackberry plants form prickly thickets that can cover several metres of ground.

White or pink flowers grow on the shrub. Blackberries change colour as they ripen, from green to red to black. The blackberry plant is semi-deciduous and loses leaves in winter.
Choosing blackberries

How to store and keep blackberries

Store blackberries in their container in your fridge. Do not wash them until you are ready to use them. Use blackberries within two or three days of buying.