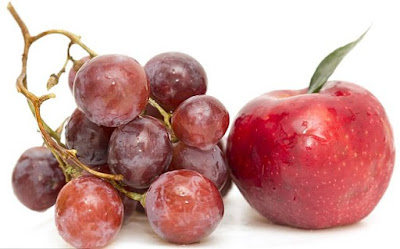 What do turmeric, apples, and grapes have in common? According to a new study, they could hold the key to preventing and treating one of the most common cancers in the United States.

esearchers have identified a number of natural compounds that have the potential to "starve" prostate cancer tumors and shrink them.

Compounds present in turmeric, red grapes, and apple peel appear to have the strongest effect, particularly in combination.

Study co-author Stefano Tiziani, of the Department of Nutritional Sciences and the Dell Pediatric Research Institute at the University of Texas at Austin, and colleagues recently reported their findings in the journal Precision Oncology.

After skin cancer, prostate cancer is the most common cancer among men in the U.S. According to the American Cancer Society, there will be 161,360 new cases of prostate cancer diagnosed this year, and around 26,730 men will die from the disease.

Previous studies have identified a number of compounds, particularly found in plant-based foods, that have the potential to reduce the risk of prostate cancer.

For this latest study, Tiziani and colleagues used a novel, high-throughput screening technique to test 142 natural compounds, with the aim of identifying those that are most effective for halting the growth of prostate cancer cells.

The compounds were tested on prostate cancer cells derived from mice and humans, individually and in combination.

The team identified three compounds that were most effective for halting prostate cancer cell growth:

These three compounds were then tested in mouse models of prostate cancer.

The researchers found that when ursolic acid was combined with either curcumin or resveratrol, the natural compounds prevented the uptake of glutamine by prostate cancer cells, which prevented tumor growth in the mice.

Glutamine is an amino acid that prostate cancer cells need in order to grow, so preventing its uptake effectively "starves" the cancer cells to death.

What is more, because ursolic acid, curcumin, and resveratrol are natural compounds, they did not cause any toxic effects in the mice.

However, the researchers note that the concentrations of each of the three compounds were higher than that which is normally consumed through diet. Still, the team believes that the findings show promise for a natural strategy to prevent and treat prostate cancer.
Facebook Twitter