Home/ Fruits/ Vegetables/7 Fruits and Veggies You Haven’t Spiralized – Yet!

7 Fruits and Veggies You Haven’t Spiralized – Yet! 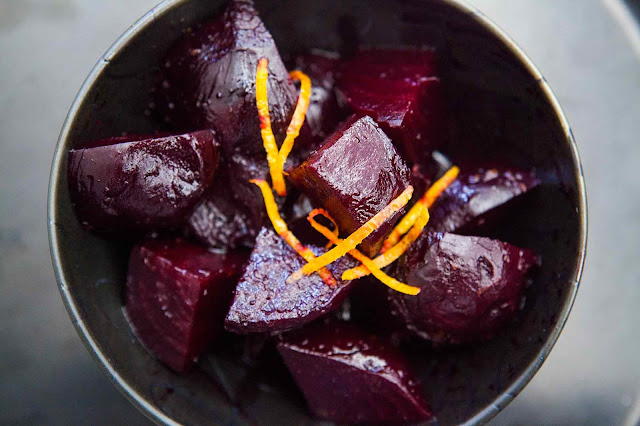 Chances are, you’ve put your spiralizer to good use over the last few years. The advent of these nifty tools has proven that they’re a great way to get your fill of fresh veggies. But if you’ve been sticking to the same star produce (we’re looking at you, zucchini and carrots!), it’s time to add a few new players to the rotation. There are a host of veggies (and even a few fruits!) that are delicious when spiralized into meals. We tapped spiralizing expert Ali Maffucci, founder of Inspiralized, to share some lesser known produce that’s easy and delicious to spiralize. From beets to bell peppers, these game-changers might just start a noodle revolution.
Apples and Pears
Veggies aren’t the only produce that can be spiralized. Certain fruits, like apples and pears, can be easily transformed into noodles, says Maffucci. Apples can be loaded straight into the spiralizer (no need to cut off the ends). For pears, cut off the top (pointy end) before spiralizing (it’s not necessary to chop off the other end). Then, load it straight into the spiralizer with the narrow end facing the blade. Incorporate apple and pear noodles into your favorite salad to add crunch and just the right amount of sweetness. The noodles can also be roasted (at 400 degrees for about 10 minutes) and topped with a pinch of cinnamon and sugar for a delicious dessert.
Bell Peppers Bell pepper noodles are a great addition to stir-fries and salads — and they’re easier to spiralize than you might think. Simply slice the stem off the top of the pepper and place the pepper on your spiralizer with the stem side facing away from the blade. The seeded inside will get messy, but you can just toss that part out, says Maffucci. Try tossing green bell pepper noodles with cucumbers, chopped mint, sliced kumquats, slivered almonds, and sliced avocado for a refreshing winter salad.
Butternut Squash This fall favorite is easier to spiralize than you might think. Simply slice off both ends of the veg (including the bulbous side) and peel the veggie completely before running it through your spiralizer. You might want to cut it in half first to make it easier to work with, says Maffucci. Sauté the noodles for 5 to 7 minutes, or roast them at 400 degrees for 8 to 10 minutes (do not boil the noodles), and voilà! You’ll have a tasty, slightly sweet pasta, says Maffucci. You can also try pulsing the noodles in a food processor to create butternut squash “rice.”
BeetsSure, they can get a little messy, but spiralizing beets is well worth the trouble. To avoid staining your hands, consider wearing kitchen gloves, suggests Maffucci. Slice off both ends of the beet and then peel it using a vegetable peeler. Run it through your spiralizer, and then wash the spiralizer immediately to avoid staining. The noodles can be eaten raw, or you can boil them quickly (for about 2 to 3 minutes), roast them at 425 degrees (for 5 to 10 minutes), or sauté them (for 5 to 7 minutes). Try tossing raw beet noodles with salad greens, goat cheese, and walnuts for a salad that’s satisfying and healthy.
Turnips
Some may fear turnips because of their bitterness, but when cooked, the root veggie softens and absorbs other flavors well, says Maffucci. Be sure to slice off both ends of the turnip and peel it completely before running it through your spiralizer. Turnip noodles may be boiled for 2 to 3 minutes, sautéed for 5 to 7 minutes, or roasted at 425 degrees for 10 to 12 minutes. They’re delicious when added to soups, salads, and sides. Try tossing them with roasted butternut squash, pine nuts, and goat cheese for a fall pasta dish you’ll want to make again and again.
Jicama
Jicama is the perfect example of how spiralizing a vegetable changes not only its shape and texture, but also its flavor, says Maffucci. Jicama can be quite bland, but when it’s spiralized, seasoned, and cooked, it can become anything from shoestring French fries to the basis of a no-cook noodle salad. Plus, since it’s a perennial vegetable, you can find it in grocery stores year-round. To spiralize jicama, simply peel it (using a peeler or your fingers) and load it into the spiralizer (you may want to cut it in half if it’s too large). Jicama noodles can be eaten raw, or they can be roasted at 400 degrees for 10 to 20 minutes, or sautéed for about 5 minutes.
Broccoli
Yes, you can spiralize broccoli — the stems, that is! It’s a little tricky and doesn’t yield perfect spirals, but it is doable, says Maffucci. The key is using broccoli with wide stems. Ideally, they should be no smaller than 1.5 inches in diameter, and as straight and long as possible, says Maffucci. (To find larger broccoli, shop at a farmer’s market or organic grocery store like Whole Foods.) Slice off the florets and cut off the bottom of the broccoli stem so that it’s even and flat. Load the stem onto the spiralizer and spiralize it as quickly as possible, applying strong pressure toward the blade. The noodles may not be pretty, so feel free to sauté them with other veggies, says Maffucci.