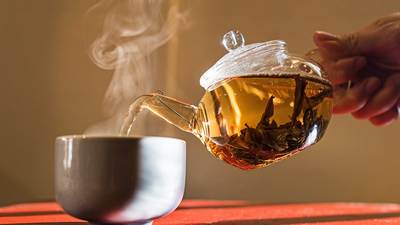 Hot tea may do more than warm your insides: Drinking at least one cup of caffeinated tea a day may lower a person's risk for glaucoma, a new study suggests.

Researchers found that daily hot-tea drinkers were 74 percent less likely to be diagnosed with glaucoma, compared with those who drank no tea, according to the study, which was published today (Dec. 14)in the British Journal of Ophthalmology.

Glaucoma is a leading cause of vision loss and occurs when pressure builds up inside the eye. This pressure may damage the optic nerve and cause vision loss or blindness. Cases of this serious eye condition are on the rise worldwide, according to the study.

The new findings show that lifestyle changes could help prevent vision loss from glaucoma, said lead study author Dr. Anne Coleman, a professor of ophthalmology at the David Geffen School of Medicine at the University of California, Los Angeles.

In the study, the researchers reviewed data from the 2005-2006 National Health and Nutrition Examination Survey (NHANES), a yearly survey evaluating the health and diet of people in the U.S. The researchers used that year because it also included eye test results for glaucoma.

Of the 1,600 men and women who had eye tests in the survey, about 5 percent had glaucoma, according to the study.

To determine whether beverage choice had any ties to glaucoma risk, the researchers looked at the NHANES data, which included information on how frequently the survey respondents said they had consumed coffee, tea or soft drinks during the past 12 months.

The researchers found that coffee lovers outnumbered fans of hot tea, but only a daily cup of caffeinated hot tea was tied to a lower risk of glaucoma. This finding held true even after factoring in whether someone smoked or had diabetes, both of which can affect glaucoma risk, the study said.

One possible explanation for this finding is that teas containing caffeine have more antioxidants than decaffeinated teas do, Coleman said.

In addition, there was no evidence that other beverages had protective effects: The analysis did not find that drinking hot coffee (either caffeinated or decaf varieties) or caffeinated iced tea or soft drinks every day was associated with a lower risk of developing glaucoma.

The researchers noted that the study did not prove cause and effect, but rather found merely an association between drinking hot tea and glaucoma risk.

But why might people's beverage choice affect eye health?

It could be that tea contains phytochemicals and flavonoids, and these plant compounds have anti-inflammatory and antioxidant properties that may protect the eye and the nerves surrounding it, Coleman told Live Science. Caffeinated tea drinkers may also have other healthy behaviors, such as getting more exercise or drinking less alcohol, that the researchers had not considered, she said.

As for coffee, it contains more caffeine and fewer flavonoids than tea, the study authors said. And the lack of protective effects observed with iced tea may be due to the small sample size of people who regularly drank the beverage, Coleman said.

One of the study's limitations is that no information was collected about the type of tea consumed, the brewing method, how long the tea steeped or the cup size used, the researchers said.