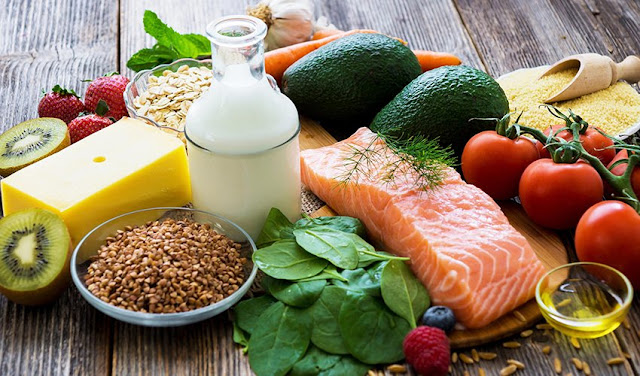 You’ve probably heard the expression, “you are what you eat,” but what exactly does that mean? Put simply, food is fuel, and the kinds of foods and drinks you consume determine the types of nutrients in your system and impact how well your mind and body are able to function.
Drinks
Avoid: Sugary drinks and excessive amounts of caffeine. Sugary drinks have empty calories and damage tooth enamel. Caffeine should also be avoided in excess, as it can trigger panic attacks in people who have anxiety disorders.

Try to: Drink at least 8 glasses of water a day (about 2 liters) to prevent dehydration. Studies show that even mild dehydration can cause fatigue, difficulty concentrating, and mood changes1, in addition to physical effects like thirst, decreased or dark urine, dry skin, headache, dizziness and/or constipation. Limit caffeine if you have an anxiety disorder. If you feel like you need some caffeine, try tea. Tea has lower amounts of caffeine than coffee and has lots of antioxidants-chemicals found in plants that protect body tissues and prevent cell damage.
Breakfast
Avoid: Skipping breakfast. Breakfast is needed to fuel your body (including your brain) after going without food during sleep and also jump starts your metabolism for the day. Skipping meals leads to fatigue and feelings of “brain fog.”

Try to: Incorporate a healthy breakfast into your routine. If you’re tight on time in the mornings, grab a whole grain granola bar, yogurt and a piece of fruit to get you off to a good start.
Lunch and Dinner
Avoid: High-fat dairy, and fried, refined and sugary foods, which have little nutritional value. In addition to contributing to weight gain, and conditions like diabetes, research shows that a diet that consists primarily of these kinds of foods significantly increases risk of depression.

Try to: Eat a diet that relies on fruits, vegetables, nuts, whole grains, fish and unsaturated fats (like olive oil). People who follow this kind of diet are up to 30% less likely to develop depression than people who eat lots of meat and dairy products.

Folate (Folic Acid, Vitamin B9)
Increased intake of folate is associated with a lower risk of depression.

Vitamin D
Rates of depression are higher in people with Vitamin D deficiency compared to people who have adequate levels of vitamin D.5 Lack of Vitamin D is thought to play a role in Seasonal Affective Disorder, which is depression that commonly starts in the fall, lasts through winter and subsides in the sunnier spring and summer months.

Vitamin D is needed to help the body absorb calcium for strong teeth and bones, and the health of muscles and the immune system. Vitamin D deficiency is associated with heart disease and increased risk of heart attacks.

Most foods do not naturally have Vitamin D, but many are “Vitamin D fortified.” Fatty fish like salmon and tuna have the most naturally occurring Vitamin D. Other foods like milk, orange juice and breakfast cereals have Vitamin D added.

Our bodies also produce Vitamin D as a result of being in the sun. Five to thirty minutes of sun exposure twice a week generally produces enough Vitamin D, with lighter-skinned people requiring less time than those with darker skin.Time in the sun beyond the suggested amounts above requires use of sunscreen to prevent skin damage and reduce risk of skin cancer. Vitamin D supplements may be used in fall and winter months.

Omega-3 Fatty Acids
Some studies suggest that omega-3s may be helpful in the treatment of depression and seem to have a mood-stabilizing effect. Omega-3 essential fatty acids may also help boost the effectiveness of conventional antidepressants and help young people with ADHD.

Omega-3 fatty acids are thought to be important in reducing inflammation, the primary cause of conditions like arthritis and asthma, and play a role in heart health by reducing triglycerides (blood fats). They may also reduce risk for certain kinds of cancer.