Facebook Twitter
Breast pain, aka ‘mastalgia’, accounts for nearly half of all breast-related complaints. However, before you start jumping to dire conclusions (breast cancer!), please read this.

If you’re suffering from pain, tenderness or increased sensitivity to touch or pressure in one or both of your breasts, we can understand that you’re probably terrified and imagining the worst. 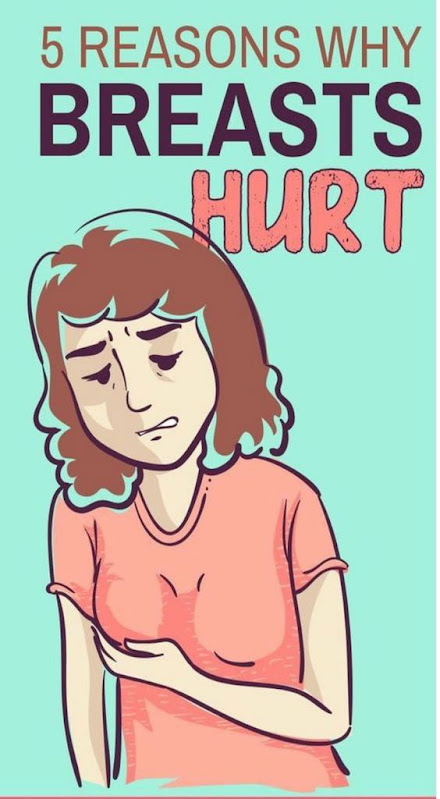 Ergo, let’s get a few facts straight first. Breast pain alone isn’t usually an indicator of breast cancer; and, according to experts, it is much more likely that tender, aching breasts could be caused by something else.

The following are 5 very likely reasons why you’re experiencing pain, or even increased sensitivity, in your breasts:

1. MASTITIS
Mastitis is an infection of breast tissue that leads to the inflammation, i.e., abnormal swelling and redness of breasts.

In most cases, it is as a result of an infection of a woman’s breast ducts and occurs in mother’s who are nursing. While breastfeeding, bacteria residing inside the baby’s mouth could gain entry into a woman’s breasts through her nipple .

Other than breast pain, mastitis could also lead to symptoms such as:

If left untreated, mastitis could lead to the formation of an abscess. Once diagnosed, your doctor may prescribe antibiotics (for the infection) and NSAID (for the pain, swelling, and fever) .

2. FIBROMAS
Finding a lump in your breast can be terrifying. However, not all tumors and lumps happen to be cancerous. One such benign (read: noncancerous) tumor is called a fibroma . It is most commonly discovered in women below the age of 30.

Fibromas are very small but feel distinctly different from surrounding breast tissue. Their boundaries are clearly defined and they can be moved under the skin. They feel almost like small marbles and could possess a rubbery feel .

While the exact cause of fibromas isn’t fully known yet, the hormone ‘estrogen’ has been thought to play a role in the genesis and development of these benign tumors. Additionally, the use of oral contraceptives in women below 20 years of age has also been linked to a higher risk of the development of fibromas .

These benign tumors could grow, especially if you’re pregnant. Once they hit menopause, women often report fibromas as shrinking. It is entirely possible for fibromas to resolve spontaneously by themselves. Occasionally, however, if they’re on the larger scale, they may require surgical excision.

3. CYSTS
A cyst in one’s breast may feel like a lump, but it could actually be a small and usually harmless sac residing in your breast tissue, which is actually filled with fluid rather than cancerous or noncancerous cells .

They can be found in one or both breasts and can also present with signs and symptoms such as:


Simple breast cysts that are fluid-filled are usually confirmed on ultrasound and rarely require any treatment. If your symptoms are severe, your doctor may prescribe birth control or hormonal therapy. Surgery is recommended in rare cases.

4. MENSTRUATION
Cyclic breast pain, i.e. pain that comes and goes with your monthly periods, is the most common cause for mastalgia. This symptom is part of a group of symptoms, which are collectively called premenstrual syndrome or PMS .

It is usually generated in women due to the normal monthly fluctuations in hormones, and generally this pain occurs in both breasts. Estrogen will cause breast ducts to enlarge while progesterone will cause milk glands to swell – both events lead to tender breasts. Women who suffer from menstruation induced breast pain often describe it as soreness or heaviness of the breasts that radiates to the arm and armpit.

Generally, this pain is most severe right before a woman’s menstrual period and will often cease once the period ends. It occurs most commonly in younger women and will usually disappear around menopause.

5. DIET
Your diet could very well be the guilty culprit behind your breast pain. Foods rich in sodium, caffeine or those having a high fat content are perfect examples .

Other foods to watch out for include:
• Peanuts, walnuts, almonds, and other dried foods
• Black tea, green tea, soda, and other caffeinated beverages
• Chocolate
• Processed condiments or sauces
• Salted fries or popcorn
• Red meat and sausages

If you haven’t yet consulted a doctor, and despite limiting your consumption of the above-listed foods your breast pain still persists, please get a medical examination done at once.

Also, if you have been experiencing frequent or intense breast pain or an existing breast lump has grown or changed, please consult a doctor right away. Stay healthy!
Facebook Twitter
LihatTutupKomentar
Post Selanjutnya Post Sebelumnya