Home/ health/ If You’re Not Using Castor Oil, You’re Missing Out. Here Are 7 Things You Need To Know

If You’re Not Using Castor Oil, You’re Missing Out. Here Are 7 Things You Need To Know

Facebook Twitter
Made from the castor seed, castor oil is rich in ricinoleic acid and triglycerides. These two components make it a powerful medicinal oil that can be used both externally and internally. For some, having castor oil is the cure-all to their illnesses.


Castor oil is considered to be very unique because ricinoleic acid is not found in many other remedies, and castor oil is such a dense, concentrated source. It is obtained by cold-pressing the seeds and subsequent purification of the oil by heat. 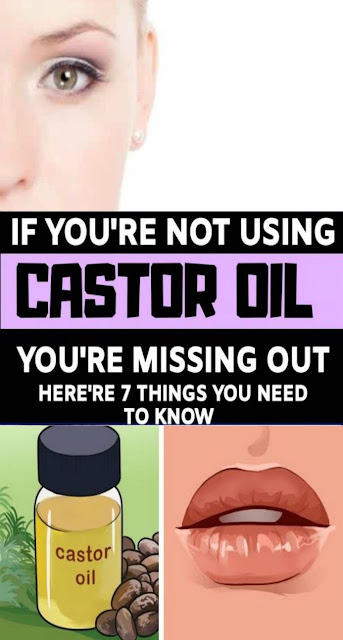 Aside from its primary ingredient ricinoleic acid, castor oil also contains several beneficial esters and salts that function primarily as skin-conditioning agents. At the same time, they help stabilize the texture and consistency of products, which is why castor oil is used in so many cosmetics, skin, and hair-care treatments.

Throughout history, castor oil’s most popular use has been for treating skin, hair and digestive conditions. Check out the seven things that castor oil can do for you and you may decide to become a loyal user of this healing oil.


Castor oil acts as a laxative. According to studies, the main fatty acid in castor oil, ricinoleic acid binds to receptors on the muscle cells of the intestinal walls and causes those muscles to contract and push out the stool and thus, relieves constipation.

Castor oil works quickly and effectively when taken during the day. To relieve constipation, take a 15-milliliter dose of the oil once a day. Children shouldn’t take more than 2 teaspoons daily. Avoid using it on children below 2 years old. Castor oil has a very strong taste, therefore to mask the flavor, some suggest chilling it a bit before consuming or mixing it with fresh orange juice.


Castor oil helps in relieving dry and itchy skin. Also, it makes a great skin anti-inflammatory, moisturizer, blemish treatment, and can slow down the signs of aging such as the appearance of wrinkles because it helps improve the production of elastin and collagen.

The ricinoleic acid found in castor oil also makes it a great natural home remedy for fighting mild acne. As it penetrates deep into the skin, it fights bacteria overgrowth that can clog pores, while softening and hydrating irritated skin at the same time.

To make your own skin conditioner, combine 4 tablespoons of castor oil, 3/4 cup of shea butter, and 5-10 drops of Roman chamomile, lavender, or carrot seed oil.

Mix 3/4 cup shea butter, 4 tablespoons castor oil and 5 to 10 drops of lavender oil, Roman chamomile or carrot seed oil. Mix the castor oil and shea butter to get the consistency you want. After that, add the essential oil you’ve chosen and mix again.. Pack it into jars and use freely.

3. Add shine and growth to hair


Using castor oil can help your hair grow faster, stronger, thicker, shinier and free of dandruff. It contains omega 6 fatty acids that make the hair shine, but also goes to the root of the problem and stimulates blood circulation.

Massage slightly warmed-up castor oil into your hair and scalp, and it will increase the blood circulation to your follicles, which promotes hair growth.

Also, you can make a hair mask from 1 tablespoon castor oil, 1 tablespoon olive oil and juice from 1/2 lemon. Massage this through the hair to the tips and letting it sit for 30 minutes before washing and styling your hair. This hair mask also has antifungal and antibacterial properties that can help clear up dandruff and scalp infections.


Castor works well as a treatment for toenail fungus. For the same reason, it helps cure acne, helps get rid of persistent fungal infections, cysts, and moles. To treat your toenail fungus, apply a small amount of castor oil with a pinch of baking soda to the affected area and leave it to sit for 1 hour. Repeat this procedure until your fungal infection completely disappears.

When ingested, castor oil also works internally to balance gut bacteria and reduce lingering toxins, molds or yeasts that can cause fungus to develop in the first place.


Castor oil is often used as a natural treatment for joint swelling, arthritis pain, and inflammation. It possesses powerful anti-inflammatory properties that make it an ideal oil for a massage that can be applied to aching muscles, joints, and tissues.

For this purpose, try massaging the affected area at least twice a week. This will greatly decrease inflammation and pain associated with these conditions.


Enhancing the absorption of fat molecules within the digestive tract is crucial for the formation of healthy hormones. That’s what makes castor oil a powerful remedy to balance hormones naturally.


Castor oil is believed to promote lymphatic drainage, blood flow, thymus gland health and other immune system functions. Studies have shown that patients who applied castor oil topically (usually to the abdominal area) experienced a significant increase in the production of lymphocytes. Lymphocytes are the immune system’s natural “disease-fighters” that attack external invaders such as bacteria, toxins, and other perceived threats.

Castor oil has some great medicinal properties. Be aware that some people may be allergic to the oil, so test it on a small area before going crazy with it. Who knew that one simple oil could be so helpful?
Facebook Twitter