Aneurysm is defined as “an abnormal bulge or ballooning of the wall of a blood vessel. An aneurysm can burst (rupture) causing internal bleeding and possible death.” A migraine, on the other hand, is defined as “a throbbing pain or a pulsing sensation, usually on just one side of the head.” 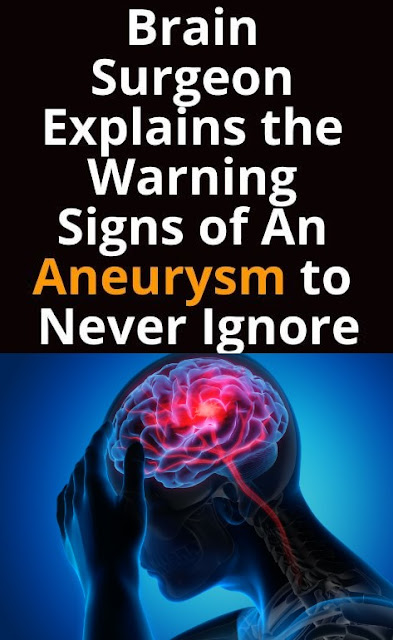 On April 1, 2017, Lee Broadway, a wife and mother to 4, suddenly passed away. The doctors explained that the reason for her death was a brain aneurysm, which was earlier manifested by a severe migraine. In fact, she had suffered from migraine since the age of 8.Her family was shocked, especially her husband Eric Broadway who was told that “Everything looks good” just two hours before hearing “There’s nothing we can do.”As he explained, there had been a complication during the aneurysm procedure, which led to Lee losing too much blood in the brain.Sadly, Lee`s family celebrated what would have been her 42nd birthday only 5 days after her death.

Dr. Howard A. Riina, professor and vice chairman of neurosurgery at the NYU Langone Medical Center, was taken aback by Lee’s story and decided to do something.  His first step was educating the public about the nature of aneurysms and the difference between them and migraines.” (It’s like) the worst headache of someone’s life. It’s not surprising for someone to come into the emergency room – even if they have a history of headaches or migraines – and say they feel like they’ve been struck by lightning or have a headache that brought them to their knees. It’s this severe, severe headache that’s out of the ordinary,” Dr. Riina describes the pain felt from an aneurysm.“People with migraines sometimes have auras (visual disturbances), and they have routines and things they do to help relieve the headache — being in a dark, quiet room and taking medicine, things like that. But if that doesn’t help, it could be an aneurysm. It’s a very unique headache, and really the main symptom is feeling like this headache is like none you’ve ever had” he adds, describing how a migraine sufferer can tell the difference.

Aneurysms are quite rare. In fact, “It’s somewhere between 30,000 to 50,000 cases a year. And ruptured aneurysms (as experienced by Lee Broadway) are a much smaller percentage,” Dr. Riina states.

It is estimated that 5-10% of the world`s population has an uruptured aneurysm, which is 350-700 million people.

3. MOST UNRUPTURED ANEURYSMS ARE ASYMPTOMATIC

As little as 1-2% of aneurysms actually burst annually. The individual doesn’t experience any symptoms in most of the cases.

4. FAMILY HISTORY IS A KEY INDICATOR

“If you had a parent, uncle, brother, sister or cousin that had an aneurysm you should mention it to your primary care physician or your neurologist,” Riina says.

Ehlers-Danlos and polycystic kidney disease are conditions that increase the risk of brain aneurysm. As for lifestyle choices,  smoking and eating a high-fat diet are known to increase the risk.“Unless you have a family history or one of these conditions, the likelihood that you’ll have [an aneurysm] is pretty low,” he says. “The average person doesn’t need to run off and get a screening.”

These are the common signs and symptom of a ruptured aneurysm, according to WebMd,

An unruptured aneurysm may produce the following symptoms: